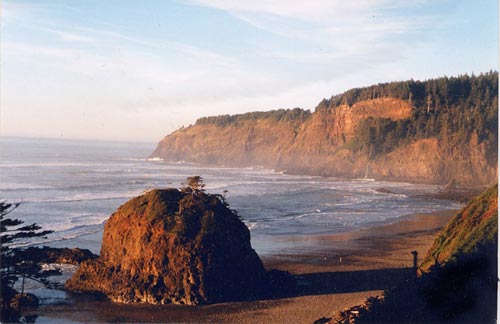 (Oceanside, Oregon) – It's hard to miss as you pass it, yet few venture down there. It’s a hidden spot in plain sight.

Scenic and serene Short Beach lurks between the tiny village of Oceanside and the well known Cape Meares, with its lighthouse and other oddball features. Along what is called Meares Loop Road, which is what the Three Capes Tour is called at this point, there's a tiny mile marker designating MP 4, and then Radar Road (so named because it did indeed have a radar station there once). It’s here where you’ll find Short Beach and its rather adorable little blob of a seastack sitting at the tideline. 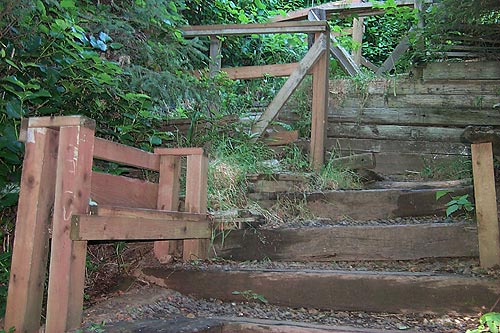 From the road, the place looks a bit like Neskowin to the south.

There’s a handful of parking spaces available by the side of the road, and then a mean-spirited, leg cramp-inducing set of steps descending down, called something like “Stairway of a Thousand Steps.” But it’s better than the alternative, which was a slippery path down to this clandestine beach which resulted in so many head injuries and other ailments locals pooled their resources and built this structure.

Next to this pathway down sits a large concrete and steel monstrosity that is used to drain excess rain water onto the beach – resulting in a manmade yet lovely waterfall. It can roar at times, with the way rain can hit this area.

Proceed down to the beach and you’re on a bit of sandy heaven, usually all alone here. There’s another impressive waterfall down the way, and what appears to be a cove within a cove.

Indeed, Short Beach is aptly named: there’s not much of it. On the southern end are the cliff structures that hide Lost Boy Beach. There is apparently another secret tunnel there that only becomes visible during extremely low tide events.

To the north is Cape Meares, with its lighthouse visible up top. In between, it’s just quiet beach with a lot of driftwood logs, sand, and then piles of large stones where walking is not easy.

This is a small, enclosed beach and is downright dangerous during high tides or even slightly stormy weather. It is only to be entered during calm weather and periods when the tide is giving you plenty of room to keep away from logs and the soaring cliffs above it. 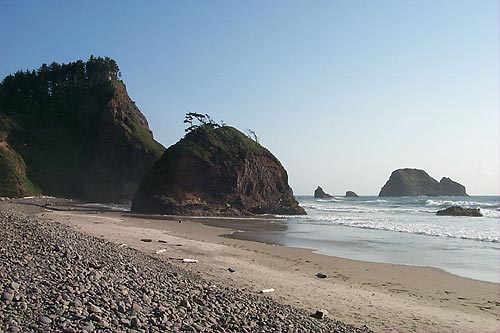