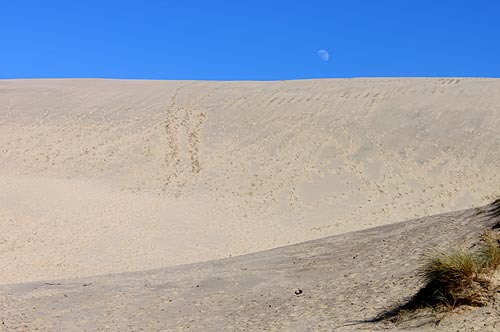 (Pacific City, Oregon) – It's a sight few people see. Yet it's full of wonders that may be among the most striking on all of the Oregon coastline.

McPhillips Beach is its official name, part of the larger area that is Cape Kiwanda State Park, which includes the main section of Cape Kiwanda by the Pelican Pub parking lot that everyone is familiar with. But to find McPhillips you’ve got to head a mile north of the main parking lot and look for a very hidden, unmarked, one-lane road that appears out of nowhere in the forest.

You can actually drive on this beach, but it’s not recommended. There’s a small parking lot just above the beach itself. Tow trucks wander these loose, fluffy sands to aide any motorist who might be stuck. 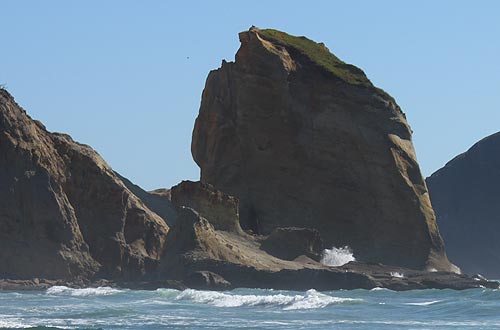 Walk this nearly one-mile mile stretch from the beach access to the edge of Cape Kiwanda and you’ll find it only appears empty: there’s actually a variety of interesting objects along the way. The beach itself yields all sorts of interesting finds, mostly in the form of stuff that washes up or the intriguing rock pile constructions left by humans.

Or perhaps you may be there at just the right time to see a hang glider emerge from behind the cape, or a daylight moon rise over the bright sands of the dune.

Things really do change abruptly around here. Earlier this winter a massive arch stretched over one area of the cape, perhaps 50 feet or more above the surf. Now it’s gone. See the arch here 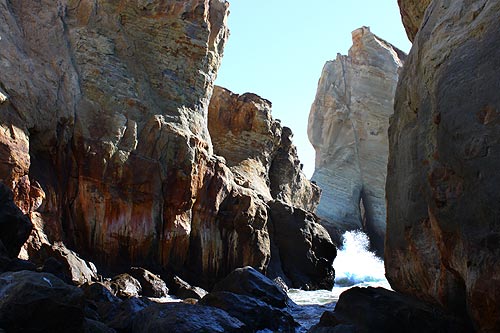 Along the way the you find it’s a lot easier to walk on the harder, wet sands than the loose, dune-like sands of much of the beach. But at one point, as the tide line seems to make a cove-like curve, you find your feet sinking deep into the wet sands at every step, not unlike walking on deep but wet snow – and just as annoying or uncomfortable. It’s suddenly laborious to walk here, so it becomes easier to walk on the dryer, looser sand for a while.

A soaring dune gives you access to the top of the cape here. 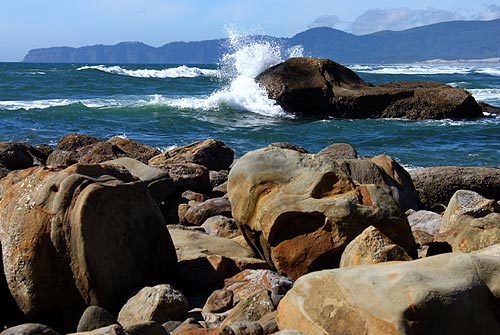 Then comes the mind-blowing section: the northern edge of the labyrinth-like canyon at the cape. First, you encounter a landscape of enormous boulders covering large, coarse sand grains of unusual colors and textures. It forms a kind of natural jetty structure, where the this mini-cove rages around you. At times, you’re actually a little lower in elevation than the water itself – which is both unnerving and wondrous.

The origin of these is a rather frightening and sobering thought: they are chunks of the cape itself that have been knocked off from above, and plenty were probably just tossed here by enormous waves. It’s a reminder this is actually a dangerous place and you don’t want to linger long. In fact, it’s not even accessible on anything but nicer weather days and very calm conditions.

If you’re wondering what happened to that arch that disappeared this year, you’re looking at chunks of it.

Then comes the most spectacular portion of this area: the ocean canyon. You can see the ocean between these two looming cliffsides around you, and the labyrinth-like area of sandstone and raging sea that meanders around the front of the cape – partially visible from above when you’re on top of the headland. Big waves smack and roll around these surfaces, sometimes splashing upwards with a slightly scary vibe. Tall, craggy walls swoop upward and around you, covered with wild reds, gray, brown and other colors. 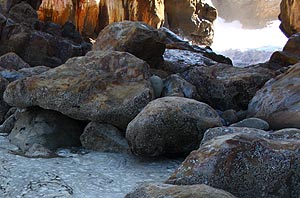 It is undoubtedly one of the more magnificent sights along all of the Oregon coast.

In the distance, more notches and holes are visible through other soaring rock structures, which look a little like features from a Yes album done by Roger Dean, or something out of Dr. Suess.

Perhaps the most striking aspect of all this is the fact you’re actually a few feet below the ocean here. A huge pile of rocks (and probably some other material beneath) appears to just stop the ocean, a little like a jetty. This is also the most frightening and potentially dangerous aspect of this place as well, since the ocean finds its way right up to this pile of boulders there’s the serious possibility big waves will spill over and knock you around.

These photos were taken on an unusually calm day, so that did not happen. But it can and will, so again: stay away on all but the calmest of conditions.

Astounding sights are not the only possibility here. Under certain conditions, the ocean sounds a bit like the roar of a small jet engine in the distance. Perhaps it’s just the acoustics of the sound of the waves bouncing around the cliff walls, but it’s an unusual and delightful facet of this spot. 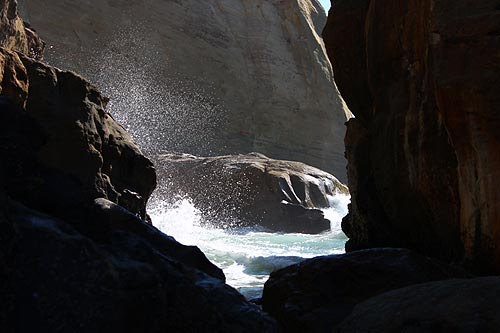