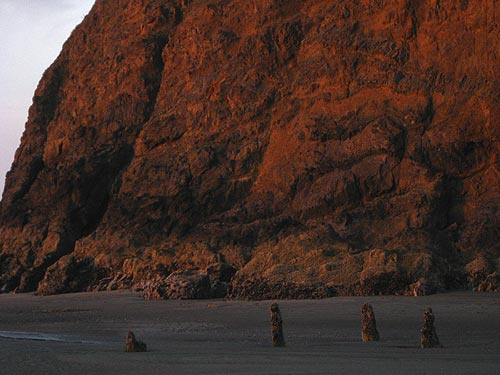 The highlight here, of course, is Proposal Rock, which greets you on first sight upon entering.

From the parking lot it's a short walk to the beach and its slightly unusual dark grains of sand, plus enough driftwood to make yourself a decent fire.

Proposal Rock is the intriguing blob-like structure sitting in front of you, boasting a small forest sitting on top. There's a sizable creek between you and it, however, and to get to the structure means crossing this cold body of water barefoot.

Atop the rock, there are some hidden trails meandering through the forest where the views are somewhat legendary. Watch the tide closely or you could get stranded, and be careful of the trail's slippery entrance.

Near the entrance, look for a small, round brass plaque, an oddity embedded there early in the century (pictured above).

Proposal Rock got its name from a young man that proposed to his girlfriend there early in the 20th century. See more about Neskowin, including its history.